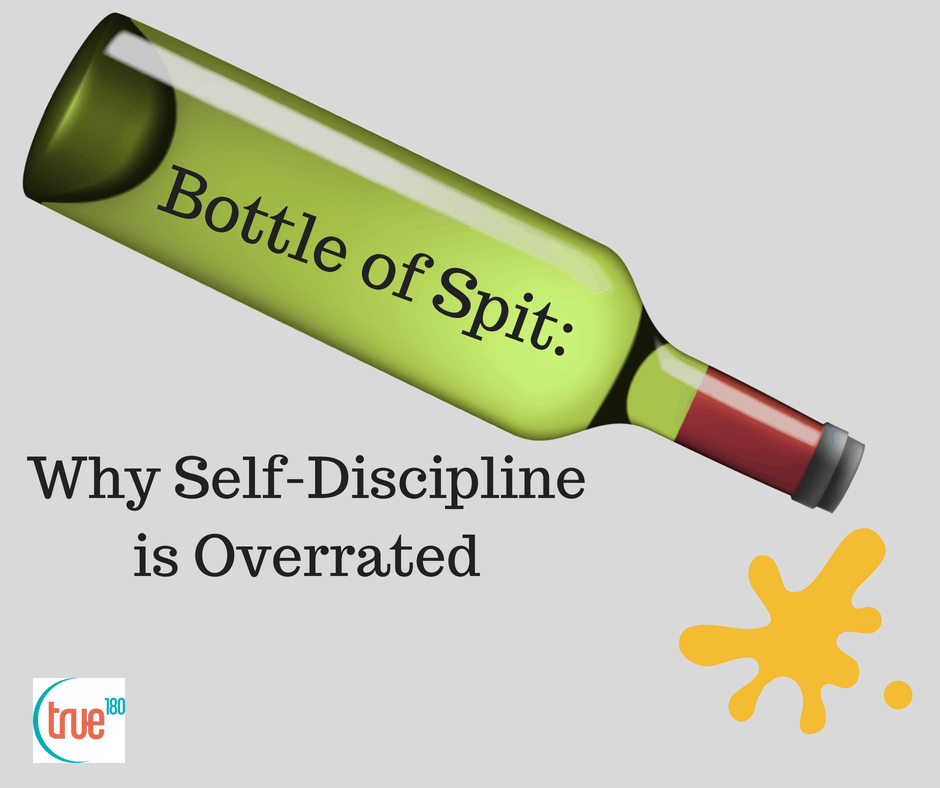 Bottle of Spit: Why Self-Discipline is Overrated

My parents used to call me “a bottle of spit.”  Well, before I had tubes in my ears that’s what it sounded like to me.  My parents we actually calling me “a bottomless pit” because they would run out of food before I ran out of space in my tummy.

Having an unlimited appetite in a world of unlimited food is a great way to gain a lot of weight, and I did. I entered High School at 210 (without any of the muscle I have now), and I’m not that tall. My weight peaked at 240, and I’m still not that tall. (Don’t tell little Mac, she thinks I’m tall…)

Thankfully I’ve been able to work my way down to my Middle School weight (190-ish), but it hasn’t/isn’t easy being a bottle of spit with very poor impulse control1.

Speaking of poor impulse control, I recently got into a bad habit very quickly.

I walk home past a grocery store and picking up a pint of lower calorie frozen yogurt.  While it was half the calories of a normal pint, I was still eating the entire pint every time.

After only two repetitions I started having an irresistible urge to pop into to Harris Teeter on the way home. After a few weeks of trying to stop the scale was going up, and I was getting frustrated because I couldn’t stop.

I talk about the strategy of not bringing food like this into your house, but that wasn’t going to help me on my walk home from work.  Working on my self-talk was also failing me.

As in marriage, the key to winning the fight was to figure out how to avoid it.  To that end, I’ve simply started leaving all of my money at home, and I haven’t made an impulse buy at Harris Teeter since. Because I work late I am far too tired after my walk home to then turn around and walk to the store and back.

Leaving the money home is how I protect my future self from my present self.

When I tell people about my story of losing and keeping off 50lbs they usually say something like, “I wish I had your self-discipline.” The truth is I’m actually far below average on self-discipline2. (It’s 50lbs on the scale, and quite a bit more in terms of body-fat.)

If you put your common sense hat on you realize that American self-discipline hasn’t plummeted during the obesity epidemic.  2/3rds of Americans aren’t overweight or obese because we’ve contracted a self-discipline virus, it’s our environment that’s changed.

We have 24/7 access to the widest variety of unnaturally yummy food at the lowest prices in the history of our species, and we’re bombarded with the most clever and entertaining advertising we’ve ever seen.

The good news for you is that you don’t need to go out and buy more self-discipline. In fact, even above average self-discipline will eventually lose to battle against cravings.  However, you can outsmart the pit.