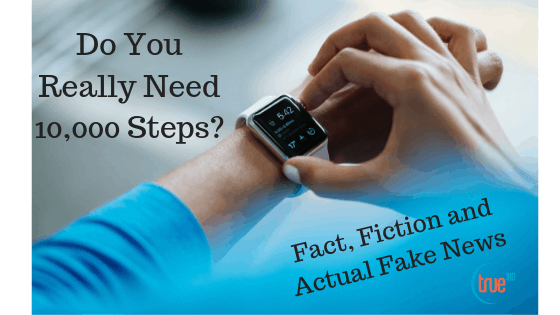 Do you really need 10,000 steps per day? Fact, Fiction and Actual Fake News

In the past few weeks there’s been articles written with titles ranging from the dismissive “You Don’t Need To Walk 10,000 Steps Per Day” to the more subtle “Do You Really Need 10,000 Steps Per Day?”.  These headlines are based on a new study that did not look at groups walking 10,000+ steps per day.

This is a good reminder that headlines rarely match the content of the research.

Quick explanation of hazard ratio (HR): if a new drug is being studied and people taking this drug die twice as often as those not taking that drug during the trial, then the hazard ratio would be 2.  2 means it’s twice as hazardous as nothing (and hopefully that drug won’t get approved!).  The opposite would be .5, which means you are half as likely to die if you take a drug, or whatever you are studying.  Here’s a if you need more on HR.

I think that the authors wanted to get people focused on attainable goals.  This is a good thing!  If you only get 2,000 steps per day then thinking you’ve got to get to 10,000 or you’re a failure is going to be demoralizing.

I believe they wanted to show that even a small increase (such as going from 2,700 to 4,400) is going to pay off.  I wish they had stopped there vs. overplaying their hand and trying to make it seem like this all that people need to do and that doing more (of anything) is pointless and/or a waste of time.

True 180 Personal Training is Charlotte’s most effective studio for women. We are changing the way fitness is done to get you the results you deserve!