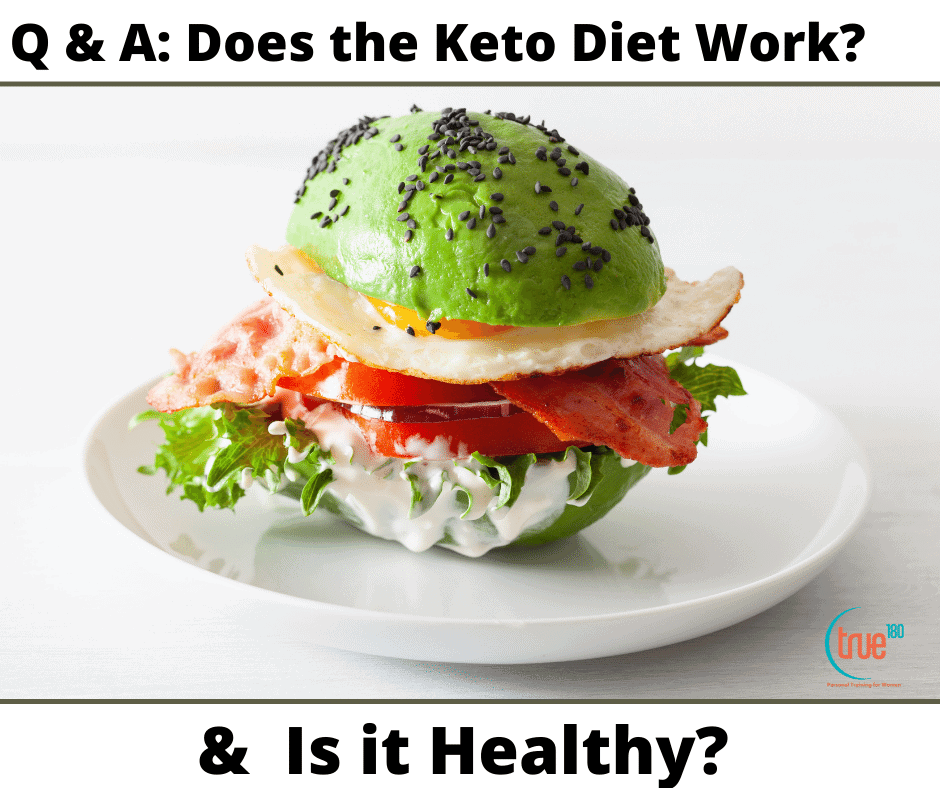 If you’ve read a magazine in the last few years you’ve likely seen something about the Keto Diet. I hope the below answers a few questions for you.

Q & A: Does the keto diet work? Is it healthy?
A: The short answer is not really.  What I mean is that, in the first week, a ketogenic diet will produce rapid weight loss, but this is not fat loss, and it’s also unlikely to be very healthy for most people long term.

Weight loss trickery
Under normal, non-keto, circumstances your body’s stored carbohydrates weigh about 6 pounds. When you cut the carbs out of your diet – going keto – then you will burn through your stores in 1-3 days depending on how active you are.  If it takes 3 days to exhaust your reserves then it will look like you lost 2 pounds per day, which is very exciting.  Sustaining a very low carbohydrate intake has an additional diuretic effect, in other words, it makes you pee a lot more.  Water is very heavy – 9 pounds per gallon, so anything that pushes water out of you makes your weight drop rapidly.
None of this weight is body fat.

Fat burning deception
Keto proponents will point out that if you are in ketosis, as measured by specific urine strips, then your body is burning substantial amounts of fat.  This is the worst kind of lying – when someone takes a fact out of context to convince you of something that is not true.  Fat loss is the result of fat taken into the body, minus the fat your body burns.  You only lose fat if you burn more than you take in.
Your body only has 2 fuels to burn – fat and carbs.  Ketones are the byproduct of using fat for fuel.  Any fat for fuel.  The fat stored in your body, or the fat in your high fat diet will both produce ketones. By definition, ALL ketogenic diets are HIGH in fat.  All.

Take away the carbs and your body switches to fat because survival, and, even if your calories in exceed your calories out on a ketogenic diet, your body will still be in ketosis and the pee strips will change colors even though your body is not losing any fat. Fat is THE easiest macronutrient to overeat.  This is because fat has more than double the calories of carbs or protein.  When foods have lots of calories in small packages the calories add up very quickly.

If you put enough butter in your coffee you can gain body fat while losing weight during the first few weeks of a ketogenic diet. If a ketogenic diet, or any diet, helps you lose fat it is because it helps you eat fewer calories. Keto diets worked a lot better a long time ago…

But weren’t the Inuit Keto and healthy?
Yes, as far as we know, the Inuit (Eskimos) did eat a ketogenic diet, and seemed to be healthy. If our assumptions about what they ate, and their ancestral health are correct, that doesn’t mean that adding the Inuit version of a turducken to your diet will cause you to lose weight, or be healthy.  The Inuit turducken, therefore original inspiration for the turducken, was called kiviak, and was several hundred birds stuffed inside of a seal that was left to ferment under a rock for a few months.  Apparently seals are much larger than I imagined they were, and, also, they put the whole bird in there – feathers, beaks and all.

The reason they ate kiviak, and considered it a winter delicacy, is because they didn’t have any other choices.  Fermentation helped preserve food for the winter when hunting was even more difficult, and they had no grocery stores or restaurants or keto-candy bars available.

The most coveted part of the kiviak was the heart.  Think about that.  To you and I this sounds horribly disgusting, and, well, it probably is.  You and I would probably need to be 14 days without any food to be like, “yeah… um… ok, so, like, I guess I’ll eat that fermented seal heart from the other week…” and we’d probably still gag.  And there’s no way in hell that you or I would be overeating fermented beaks.

What’s the point of all this gross talk?  Number one, I’m mostly a large child, so I enjoy grossing people out.  Number two, it’s to point out the real secret to Inuit health on a ketogenic diet: caloric balance.  When the best tasting food of your whole year is a fermented seal heart (that also smells like dead birds) you’re just not ever going to overeat relative to your energy needs.

But, what about Paleo?
Paleolithic humans ate carbs whenever they could.  At the Arctic circle the Inuit has access to none, so they ate none, but the rest of the planet is very different.  The assumption of best-selling authors that paleolithic humans were carnivores who rarely ate carbs is wrong.  Research from preserved ancient human poop, ancient camp sites, and studying the few non-industrialized humans that are still alive show that humans eat carbs. We eat meat and fish too, and we also find starchy roots, wild yams, wild grains, etc, and we eat them every day if we can.

Bottom Line
Ketogenic diets suck for most people because they don’t mix well with anything, make most people feel like shit, often suppress thyroid function, and the high saturated fat content pushes cholesterol to unhealthy levels.  Keto diets also emphasize eating the highest fat foods available which is disastrous when people inevitably break down and have any source of carbohydrates.  Because a ketogenic diet requires perfection at a minimum, they will fail essentially everyone because nobody will be perfect forever.