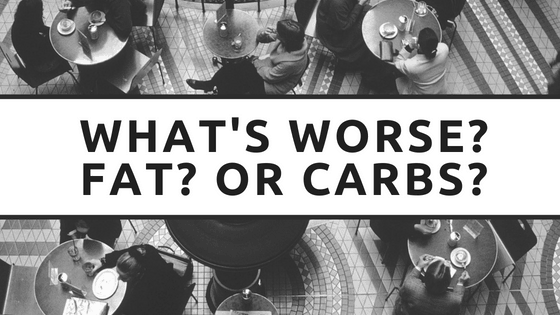 🗣 Q: So, a girlfriend and I are talking about our Aug birthdays, where we are/wanna be weight wise/healthy eating blah blah blah. Carbs came up. If one is counting carbs, what’s more important? The total carbs or net carbs (which I think is total minus fiber?) ?

A: First of all, thank you very much for the great question. I was struggling to come up with a topic for this week’s installment, and this arrived right on time!!!

This story is embarrassing to tell. Partly because I look like a fool, and partly because watching someone you know and like publicly double-down when they’ve already proven themselves wrong is hard.

Back in 2007 Gary Taubes1 released Good Calories, Bad Calories (GCBC). This wasn’t the first book to claim that your body-fat levels are determined by your insulin levels, but it was (and is) the most impactful. I bought this idea hook, line, and sinker. I even interviewed Gary for several articles that I’m embarrassed to have my name on. (You can’t hide from your past online2.)

Gary’s fame and influence from GCBC and the follow up, Why We Get Fat, allowed him to fund a non-profit called NuSi. The mission of NuSi was to settle the question of “why we get fat?” Is it calories? Is it insulin? Is it something else?

The short version of why this matters is that answering this question (calories vs. insulin vs. other) is very, very expensive to answer. You have to turn humans into lab rats for several months.  Meaning they have to live in cages (metabolic wards3), have every bite of food controlled to nearest gram, take blood and urine daily, etc.

To Gary’s credit, he raised $40 million dollars to get this done. However, Gary was very disappointed by the results. Here’s the bullet point version (here’s the full study):

Gary’s organization funded a second, year long study that pitted low-carb vs. low-fat diets. The results were equally disappointing: weight loss was the same when calories were the same. (The folks have Examine have already done a marvelous job of summarizing this study if you’re curious.)

This was the original question, and the answer is this is the wrong question because the answer won’t help you get what you really want. What you really want is to lose weight now and keep it off. So, let’s talk about that. Here’s our free nutrition guide and here’s something I learned from the French.

[1] Gary is a wonderful person who has gone out of his way to be helpful time and time again.  He is also the reason some of the most definitive research on “why we get fat” has been funded. Unfortunately, he’s made a career out of promoting low-carb diets, so he’s having a hard time listening to the results of the research he funded and help design.

None of this is meant to be an attack on his character.

We have all been (are?) wrong about something(s).  We have all persisted in claiming to be right in spite of massive evidence to the contrary. We’ve usually have the benefit of being wrong in private

[2] Here I am getting rightfully called on my BS.

[3] A metabolic ward is a room where you can precisely measure the energy expenditure of a human.